Letters That Make History: The Most Beautiful Work Of All 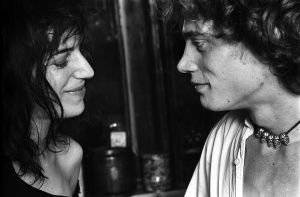 In 1967, Patti Smith and Robert Mapplethrope were two unknown, bohemian artists trying to make it in New York City. For the next 7 years, they were were all but inseparable as they lived and worked side by side.

Although they eventually went their separate ways, Patti and Robert remained close friends throughout the remainder of Robertâs life.

22 years later, Robert lay dying from AIDS and in the days before his death, Patti wrote him a letter. In it, Patti declares that of all of his work, he is still the most beautiful. âThe most beautiful work of all.â

Tragically, Robert passed away before he was able to read it.

The following is Patti Smithâs letter to Robert Mapplethrope. You can watch Patti Read it aloud, or scroll down for the text.

Patti Smith's letter to Robert Mapplethrope, written in the days before his death:

Often as I lie awake I wonder if you are also lying awake. Are you in pain or feeling alone? You drew me from the darkest period of my young life, sharing with me the sacred mystery of what it is to be an artist. I learned to see through you and never compose a line or draw a curve that does not come from the knowledge I derived in our precious time together. Your work, coming from a fluid source, can be traced to the naked song of your youth. You spoke then of holding hands with God. Remember, through everything, you have always held that hand, grip it hard, Robert, and don't let go.

The other afternoon, when you fell asleep on my shoulder, I drifted off, too. But before I did, it occurred to me looking around at all of your things and your work and going through years of work in my mind, that of all your work, you are still your most beautiful. The most beautiful work of all.